When I think about where the Jacob Leinenkugel Brewing Company was 146 years ago, and where we are today, it’s truly humbling.

That thought crossed my mind a lot last week, when my brothers and I visited with a variety of media outlets in New York City. It was a chance for us to talk with several writers and reporters, many of whom had never heard of Leinenkugel’s or Chippewa Falls, Wisconsin.. But, with Leinenkugel’s Summer Shandy going national, and with our first-ever national TV campaign debuting, we thought the time was right to visit New York City, share our beer, discuss the industry and talk about the Leinenkugel’s six-generation brewing heritage. 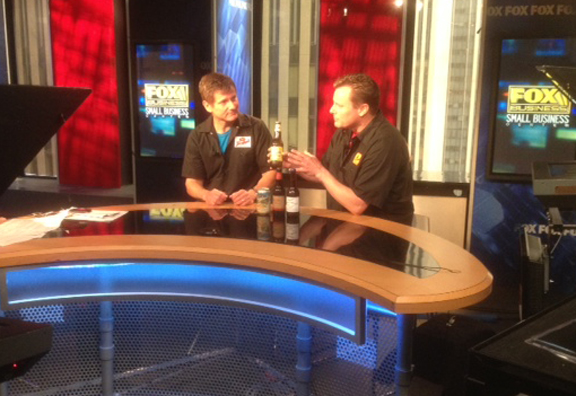 We’ve been around for  awhile, but because we’re a brewery based in Northwoods Wisconsin, there are certainly parts of the country that aren’t familiar with the Jacob Leinenkugel Brewing Company. So, we thought visiting New York City media would be a good way to tell our story to a new audience and reintroduce ourselves to those who might’ve forgotten. Once we got through the Leinenkugel name pronunciation, things went great. Everybody loved Summer Shandy, our new Orange Shandy as well as the other seasonal beers we brought along.

We had the chance to sit down with a variety of media outlets, including Men’s Health, Every Day with Rachael Ray, The Huffington Post, Self magazine and Fox News. You can watch my brothers Dick and John from the Fox News segment below:

P.S. By the way, we were excited to bump into Summer Shandy on draft in many bars in New York during our visit, so thank you to the local Leinenkugel’s team and our distributors.  It looks like beer drinkers in the Big Apple will be enjoying a taste of Leinie’s this summer!