The decision to get back into the Super Bowl after more than 30 years of Anheuser-Busch exclusivity was a no-brainer for Molson Coors. But the decision on which of its brands would get the single, 30-second spot? Not exactly a tap in.

Coors Light is Molson Coors’ top-selling beer in the U.S., and the No. 2 in the industry overall. On top of that, it’s long had a foothold in football and its “Made to Chill” marketing platform has proved a winner. Miller Lite, meanwhile, finished 2022 on a run, picking up share in the total beer industry for the year, per IRI multi-outlet and convenience data. The Original Light Beer also has long partnered with NFL teams, growing its stable of NFL alliances this season.

So both brands have a clear case for the prime advertising real estate. And both are laying claim to Molson Coors’ 30 seconds of airtime during the Super Bowl, kicking off a feisty brawl on billboards in Golden, Colo., and Milwaukee, the birthplace of Coors and Miller, respectively, as well on social and digital media. 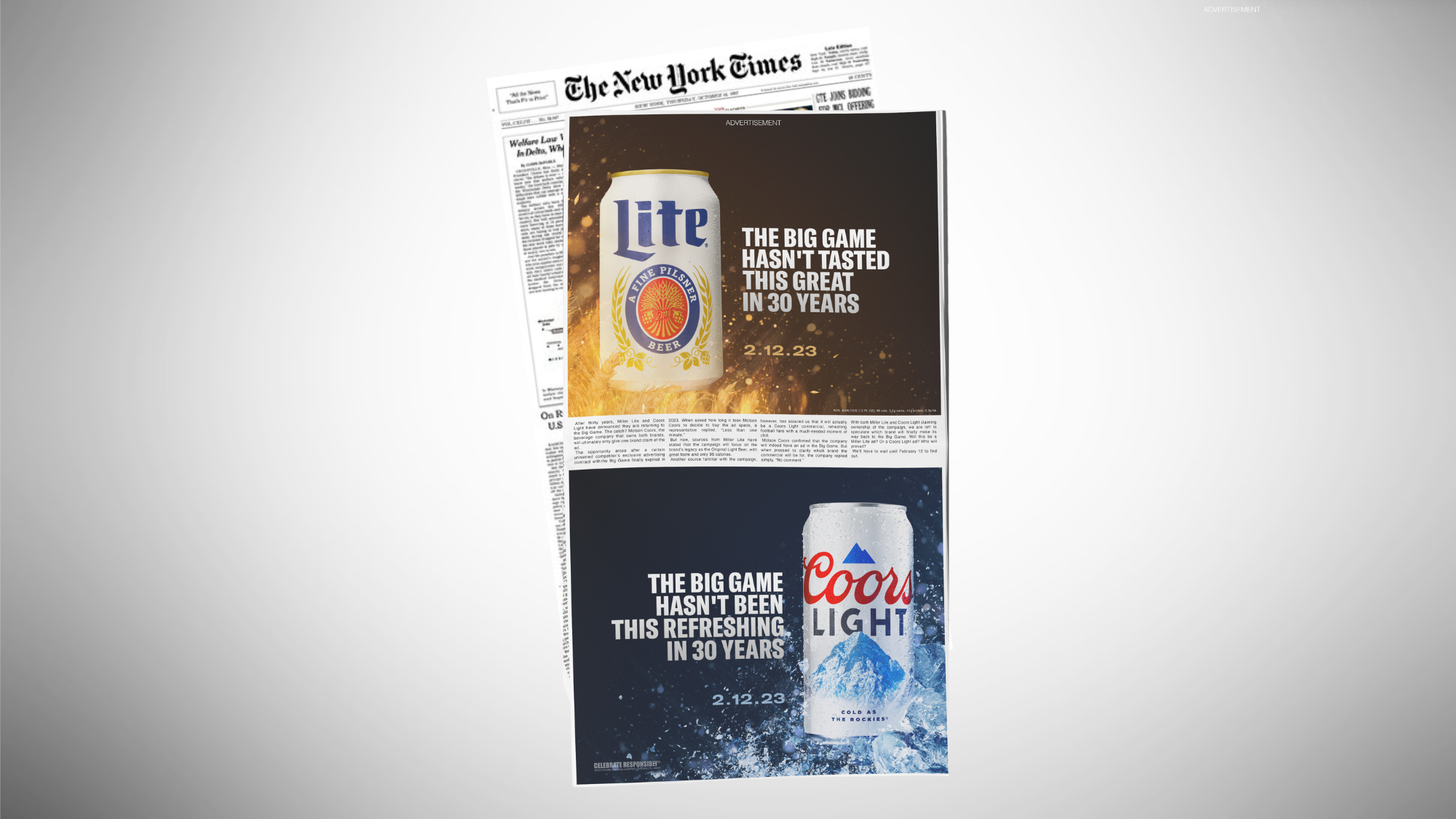 Molson Coors Chief Marketing Officer Michelle St. Jacques declined to reveal the winner, but she said fans can anticipate the rivalry between refreshment and great taste to heat up in the weeks ahead.

“Figuring out which brand or brands is no simple task,” she says. “It’s not just that Molson Coors hasn’t been in the big game in 30 years. Neither have Miller Lite or Coors Light. And when you look at the momentum we have with our premium lights right now, there’s a really good argument for either one to be featured in the Super Bowl.”

The stakes couldn’t be higher: The big game is one of the most-watched live TV broadcasts annually, averaging more than 100 million viewers. And it ranks as the largest beer-selling occasion of the year, outside of summer.

Beer brands like Coors Light and Miller Lite have been effectively locked out of Super Bowl advertising since 1989, when Anheuser-Busch bought exclusive beer advertising rights for the big game, preventing competitors from airing ads on an official, national scale.

The tactics by Molson Coors and other companies to insert themselves into the conversation via digital, local and regional ad buys also were cited recently by Anheuser-Busch Chief Marketing Officer Benoit Garbe as part of the reason the company opted to relinquish its exclusivity in 2023. “We realized the Super Bowl was not really exclusive anymore,” he said Jan. 9 at an industry summit in Florida.

Molson Coors’ approach to the Super Bowl, St. Jacques says, was premised on “taking big swings and doing something that’s never been done before -- all while making sure we landed what our brands stand for.”

This year, no elbowing into the conversation is necessary. But that doesn’t mean Molson Coors doesn’t plan to take a big swing, she says.

St. Jacques promises a spot that will be “full of firsts – both for us as a company and for the Super Bowl itself.” Her confidence stems from her team’s “strong track record of producing creative that not only breaks through in culture but also can sell a lot of beer.”

She views the opportunity to get back in the Super Bowl as not only an opportunity for whichever brand is featured, but as a point of pride for Molson Coors and its network of distributors.

“We’ve done the work. We’ve built the credibility that gives us the right to be on the big stage. Our brands are the healthiest they’ve been in years,” she says. “Our job in marketing is to get people excited about our products. If the amazing number of displays I’ve seen over the past week are any indication of the excitement in our network, I think it’s safe to say people are really pumped.”

As for the ad itself, St. Jacques says she’s received an endless stream of questions and prodding from distributors, employees and even Molson Coors leadership and board members who all want to know her team’s plan for Feb. 12, which she’s kept shrouded in secrecy.

The inquiries are so frequent she’s come up with a pithy response: “Well, if I told you, it wouldn’t be any fun, would it?”