In 2016 Miller High Life brought back a jingle that's been on the minds of many Americans since the '70s.

Miller High Life was born in 1903 and has been known as “The Champagne of Beers” almost as long as it's been around.

For decades the beer in the Champagne-shaped bottle was considered a high-end brand.

In the 1970s, though, Miller Brewing sought to broaden its appeal with the help of one of America's best ad men and that unforgettable jingle.

It started with another familiar slogan — “Miller Time,” a High Life campaign that was the brainchild of the late Bill Backer and ad agency McCann-Erickson. (Today “Miller Time” is most associated with Miller Lite, though it was created for High Life.)

Backer was an ad industry icon, literally a Hall of Famer.

He may be best known for creating Coca-Cola's “It's the Real Thing” campaign — including the famous “Hilltop” commercial in 1971, the same year the High Life campaign debuted. 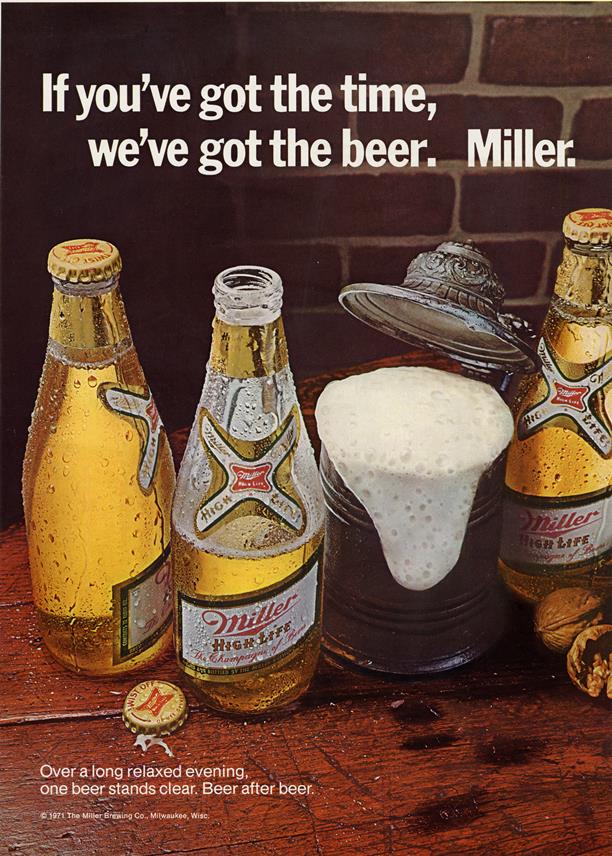 The campaign helped make High Life a beer for anyone who works hard and enjoys life.

The idea, according to a 1971 Miller Brewing employee newsletter, was simple:

“After the rush and crush of the day, a man deserves to relax with the best beer he can find. A beer to linger over … the taste of something great. When you're in a rush, any good beer will do, but when time's your own, you want something better than just a good beer. You want the best. And if you've got the time; we've got the beer. Miller.”

Now “Miller Time” needed a song — a catchy tune to capture the leisurely enjoyment of beer.

Along came “If You've Got the Time” (written by Backer, just as he wrote “I'd Like to Buy the World a Coke”).

The High Life song was inspired by music from rural America. Miller Brewing and the ad agency wanted something with universal appeal and a melody people could hum or whistle.

Several musicians recorded “If You've Got the Time,” including English psychedelic band The Troggs.

The most popular version of the song came from piano player Johnny Mack, an acquaintance of Backer's whose warm, relaxed style was a great fit for High Life.

A hit from the start

Beer fans immediately took to the new jingle. The Miller Brewing employee newsletter rounded up letters we received at the time:

“It's a tune we keep singing after we hear it.” wrote one beer fan in 1971. “It is a beautiful sound,” wrote another. And: “I am intrigued by the music in your new commercial — the most soothing on TV today.”

And this, from a fan in Watsonville, California: “It's the most attractive TV commercial I've heard. Let me add that I've switched from Bud.”

The “Miller Time” campaign nearly had a different name — “Make it a Miller weekend.”

Good stuff, though we're glad we went with “Miller Time” and its spot-on theme song.

The “Miller Time” campaign ran till 1982, when it was replaced by “Welcome to Miller Time,” co-written by Backer and featuring another catchy jingle:

“Bring your thirsty self right here. You've got the time, we've got the beer for what you have in mind.

“Welcome to Miller Time, yours and mine.”