Go into any liquor or grocery store this time of year, and you’re likely to see stacks of liquor and wine decked in garland, anticipating shoppers looking to stock up for the holidays.

It’s no wonder. Sales of liquor and wine spike during the winter holidays.

What’s less apparent, though, is that beer still drives the majority of trips to the store, which serves as a simple reminder to retailers: “Don’t forget about beer,” says Jackie Crouch, category insights executive at Molson Coors Beverage Company. “When you’re looking at your bottom line or at what’s driving revenue and trips, it’s beer.”

Not only does beer drive trips, it outpaces wine and liquor in sales, netting more than $2.2 billion in sales from Thanksgiving to New Year’s, earning 4% more dollars than wine and more than twice that of spirits, according to IRI.

“Consumers have shown they’re willing to buy across categories, so retailers can make those shoppers even more valuable by pushing beer,” she says.

While consumers are thirsting for a chance to celebrate the holidays with family and friends, the fog of the pandemic hangs over the season again this year, especially as fears of the new omicron variant grow with the potential to affect gatherings. Even before the new variant, just 72% of consumers said they planned to get together with family and friends this year, compared to 86% in past years, according to a Numerator survey.

New Year’s celebrations will be even more muted, with just 60% of consumers saying they’ll gather to mark the occasion this year versus 75% in a normal year, per Numerator.

“We’re going to see a mix of pre-pandemic and during-pandemic behaviors, with gathering types ranging from smaller or even virtual events to bigger celebrations,” says Liz Paquette, Drizly’s head of consumer insights, in a recent report. “I think the mantra for this coming (season) is the same as it has been for this past year — prepare for the unexpected and pivot as necessary.”

Regardless of how people are celebrating, it will be with a glass in hand.

Here are four things to know about beer this holiday season: 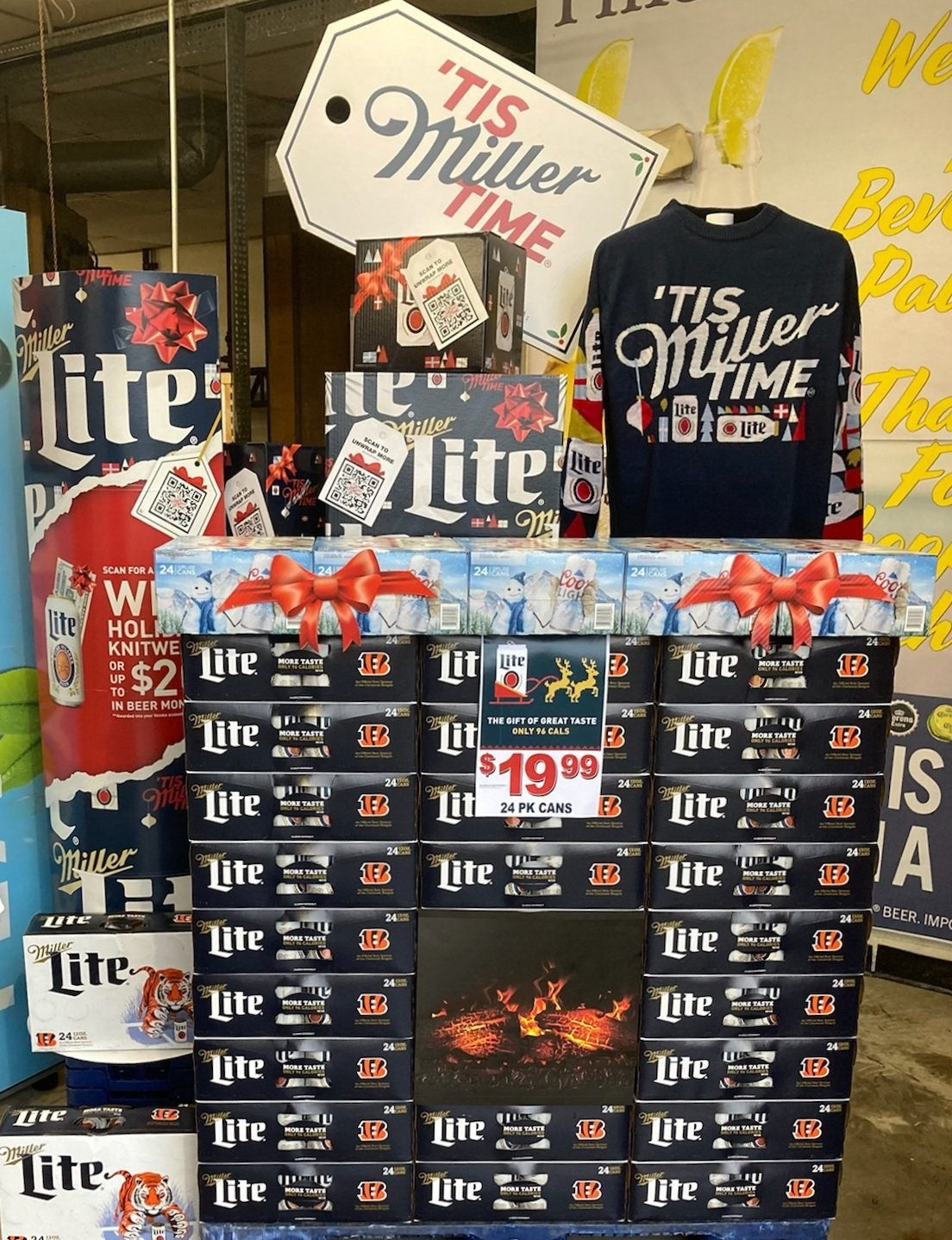 ‘Tis the season of gift-wrapped sets of spirits, but beer displays have proven time and again to move product, Crouch says, particularly in the premium lights segment. Yet wine displays typically surpass beer displays this time of year.

“Sixty percent of buyers state they were making a trip to buy beer. Two-thirds of shoppers say they go to the beer aisle on the last half of their trip. There’s an opportunity to have that display up front to capture their attention early on, otherwise you might miss that purchase intent,” she says.

“More than half of buyers say that holiday displays catch their attention,” she says. “Those displays work.”

Not only that, when Coors Light and Miller Lite are on display, they move two times faster – even more than Bud Light, she says.

“We have less representation on the floor through displays, yet Miller Lite and Coors Light are more productive,” she says, citing IRI data. Meanwhile, Blue Moon Belgian White and Peroni get a lift with displays, too.

Beer works with wine and spirits 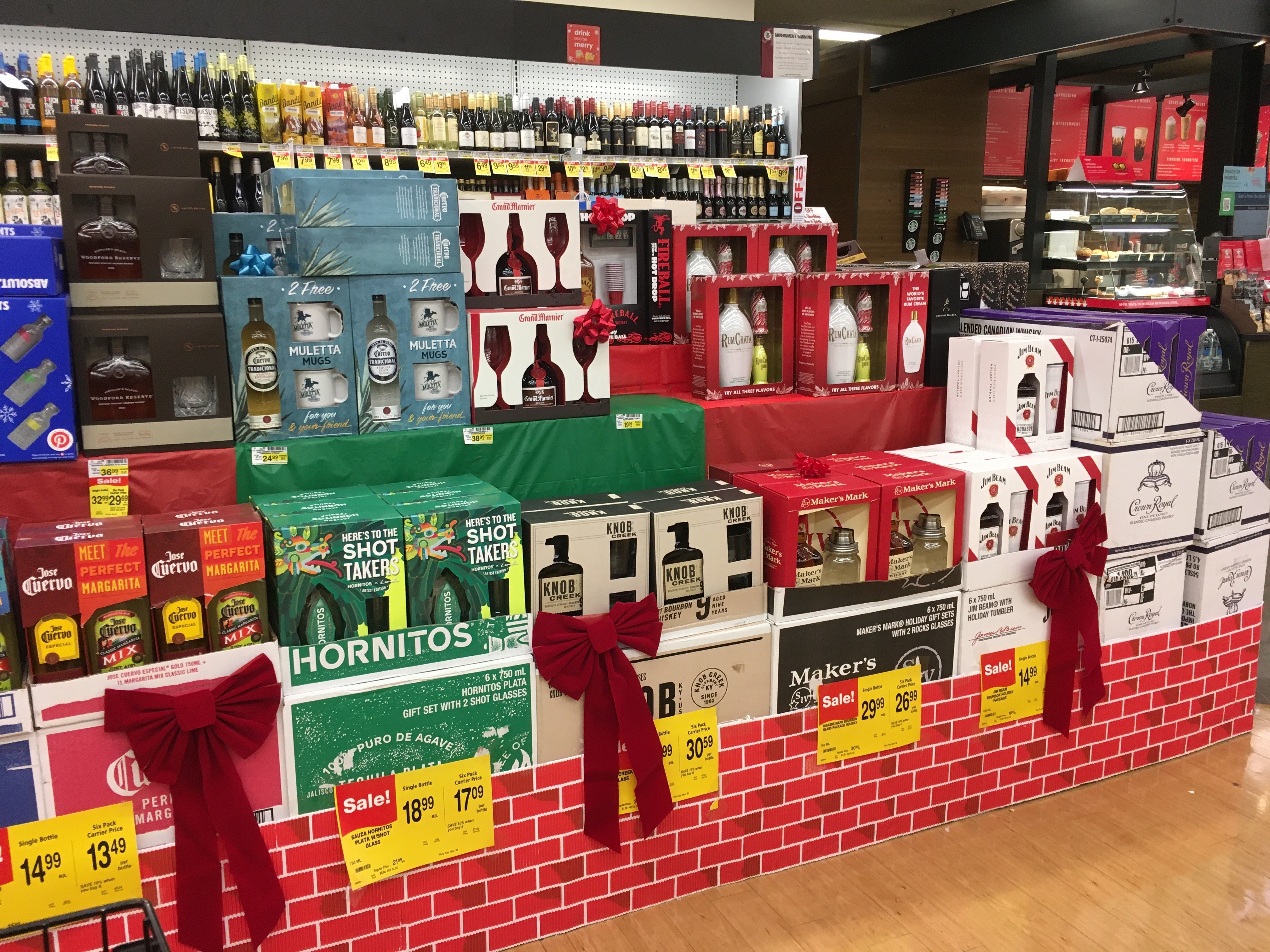 Shoppers looking to purchase alcohol are apt to move across categories. More than a third say they’ll purchase a combination of beer, wine or spirits during the holidays, giving retailers another opportunity to lure buyers by including beer alongside wine and spirits displays, Crouch says. Further, about 40% of wine shoppers buy beer during the holidays.

“When you get a shopper to buy all three or to buy wine and beer, they are more valuable than just the exclusive buyers of these categories,” she says. Rather than having a display entirely made of wine, retailers should consider trading out the lowest-performing stock-keeping units, or SKUs, with beer that’s going to move, she says.

“It’s about putting your most productive SKUs on these displays for wine and beer. When you put beer on display, it encourages cross purchasing and bigger baskets,” she says. “Beer is still driving a majority of the revenue.” 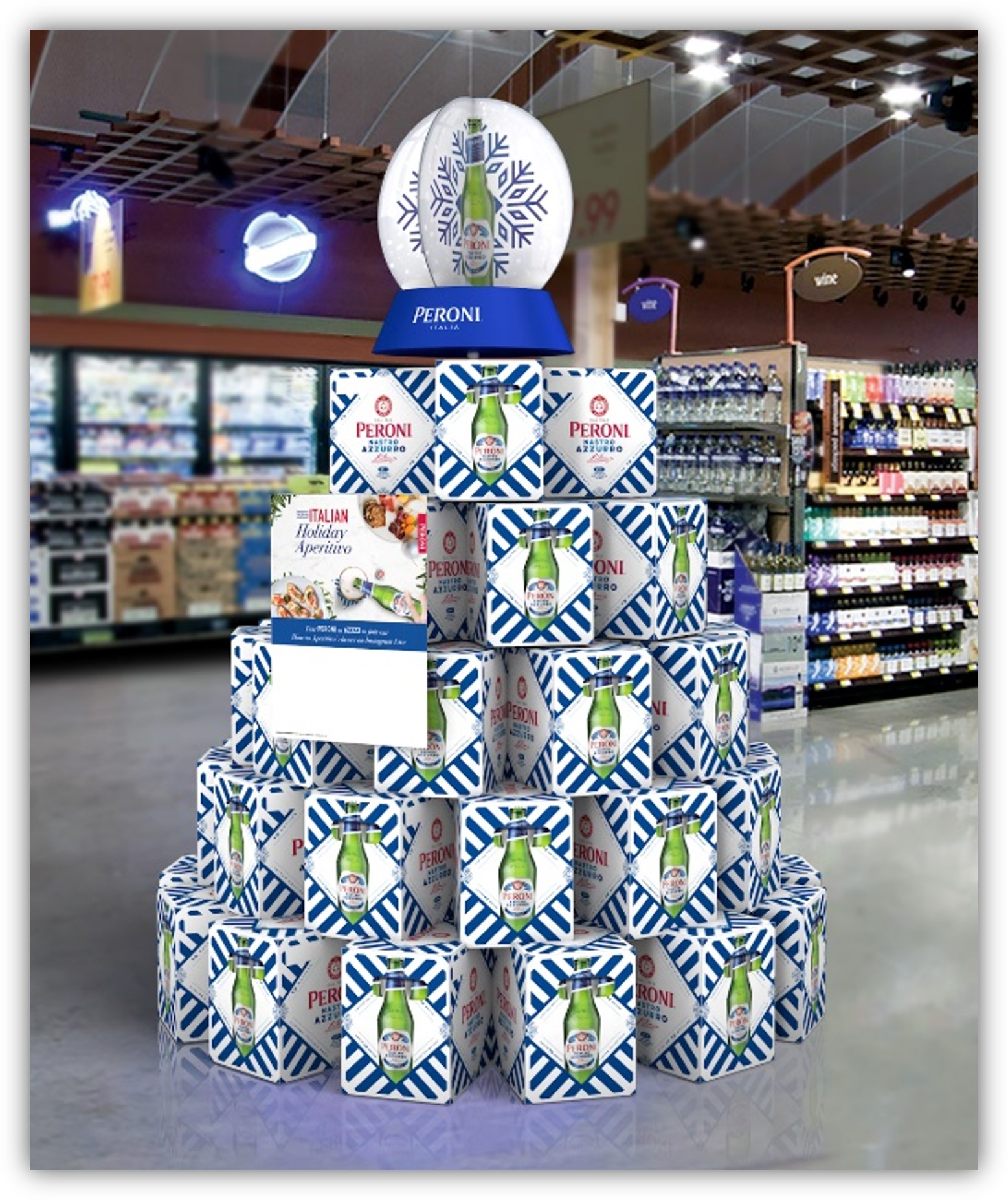 “Consumers are going to trade up this time of year, so by promoting premiumization, it can help retailers offset some of the struggles they’re facing this year with increased costs,” she says.

When above-premium beers like Peroni and Blue Moon Belgian White are put on display, Crouch says, retailers see a significant lift. Peroni, for instance, sells seven times faster than when it’s not on display during the holidays. Blue Moon, for its part, has the highest lift and incremental sales of any craft brand when displayed during the season, according to IRI.

When combined with the core brands that consumers are buying during the holidays – such as Coors Light and Miller Lite – “you have a one-two punch with premiumization, and then the cash cow to get people in the store,” Crouch says.

Perhaps the biggest beneficiary of pandemic shopping habits were e-commerce vehicles like Drizly, to which consumers flocked in overwhelming numbers. For many – about 20% of shoppers – the habit of buying online stuck. And beer continues to be the leader in online trips, reach and loyalty, Numerator found.

“There’s definitely an opportunity where consumers are shifting. They are looking more towards personalized deals on their app,” Crouch says. “From recommendations based off previous purchases to pushing deals to shoppers’ mobile devices, there’s a huge opportunity to connect with consumers online.”

That extends beyond pure-play online retailers to traditional brick-and-mortar, she says. “Some retailers, like Walgreens, have shifted away from circulars and everything is digital.” Other grocers, big-box stores and larger chains are following suit.