The email, from a former Marine Corps colleague, tipped Leinenkugel off to a project raising money for a national Gulf War memorial by brewing a collaboration beer called Captain Jack, conceived by the daughter of a fallen Marine.

“I was intrigued right away,” says Leinenkugel, president of Jacob Leinenkugel Brewing Co., and a Marine Corps veteran.

Captain Jonathan “Jack” Edwards could make a friend anywhere. Jovial, well liked, always ready with a story or a quip, he often had a beer in hand.

“He would have a beer with anybody. He would make a friend everywhere he went,” says his daughter, Adriane Hodges. 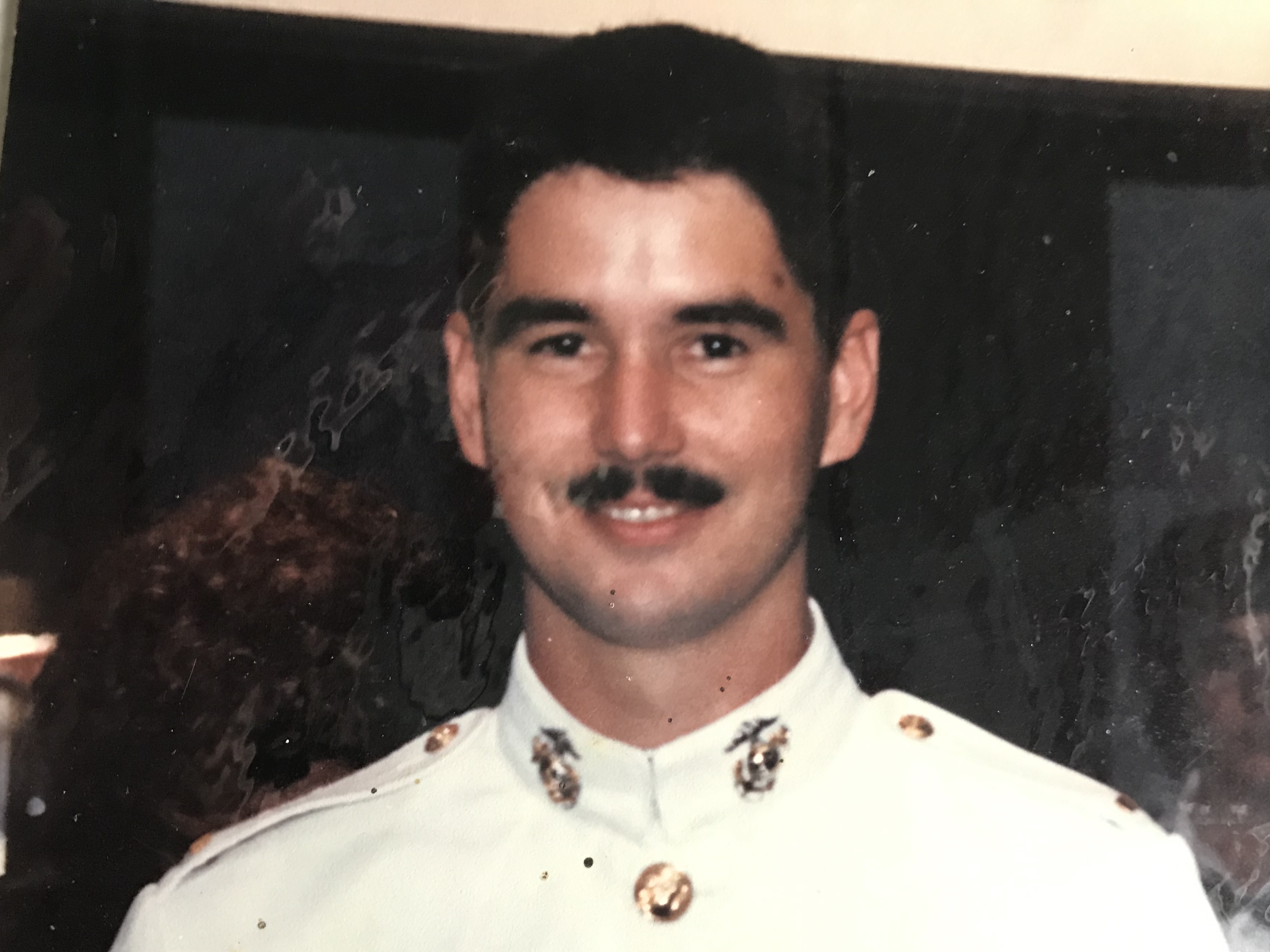 Edwards flew helicopters for the Marine Corps and served in the Gulf War. A former Army soldier-turned Marine, Edwards was flying a medevac mission over Saudi Arabia on Feb. 2, 1991, when his AH-1 Cobra chopper suffered a malfunction and crashed, killing him and his co-pilot, Maj. Eugene McCarthy. Edwards was one of 375 American service members to die in theater during Operation Desert Shield or Operation Desert Storm.

“When you suffer loss like that, it goes one of two ways. You either get a chip on your shoulder or you get motivated,” she says. “My father taught me to sacrifice and give back. If I can do my part to honor people like him, I have to.”

Flash forward 31 years, and Hodges owns a brewery with her husband, Patrick. They founded Bold Republic Brewing Company in 2018, setting up shop in Belton, Texas, population 23,845. Later that year, Hodges learned of efforts to establish a Gulf War memorial in Washington, D.C. Immediately, she thought of her father – and how selling a beer with an open-source recipe could help the memorial meet its $40 million fundraising goal.

“My dad taught me everyone can do something. You can’t wait for something to happen. You have to make it happen,” Hodges says.

So Bold Republic pulled out a recipe for a Helles bock, named it Captain Jack, and committed to donate the proceeds to the National Desert Storm and Desert Shield Memorial.

From there, the real work began. In an effort to recruit other brewers to the cause, the brewery collaborated with the memorial organizers to make the recipe available to any brewery that pledges to support the project. So far, at least four breweries have donated more than $19,000 to the memorial efforts. 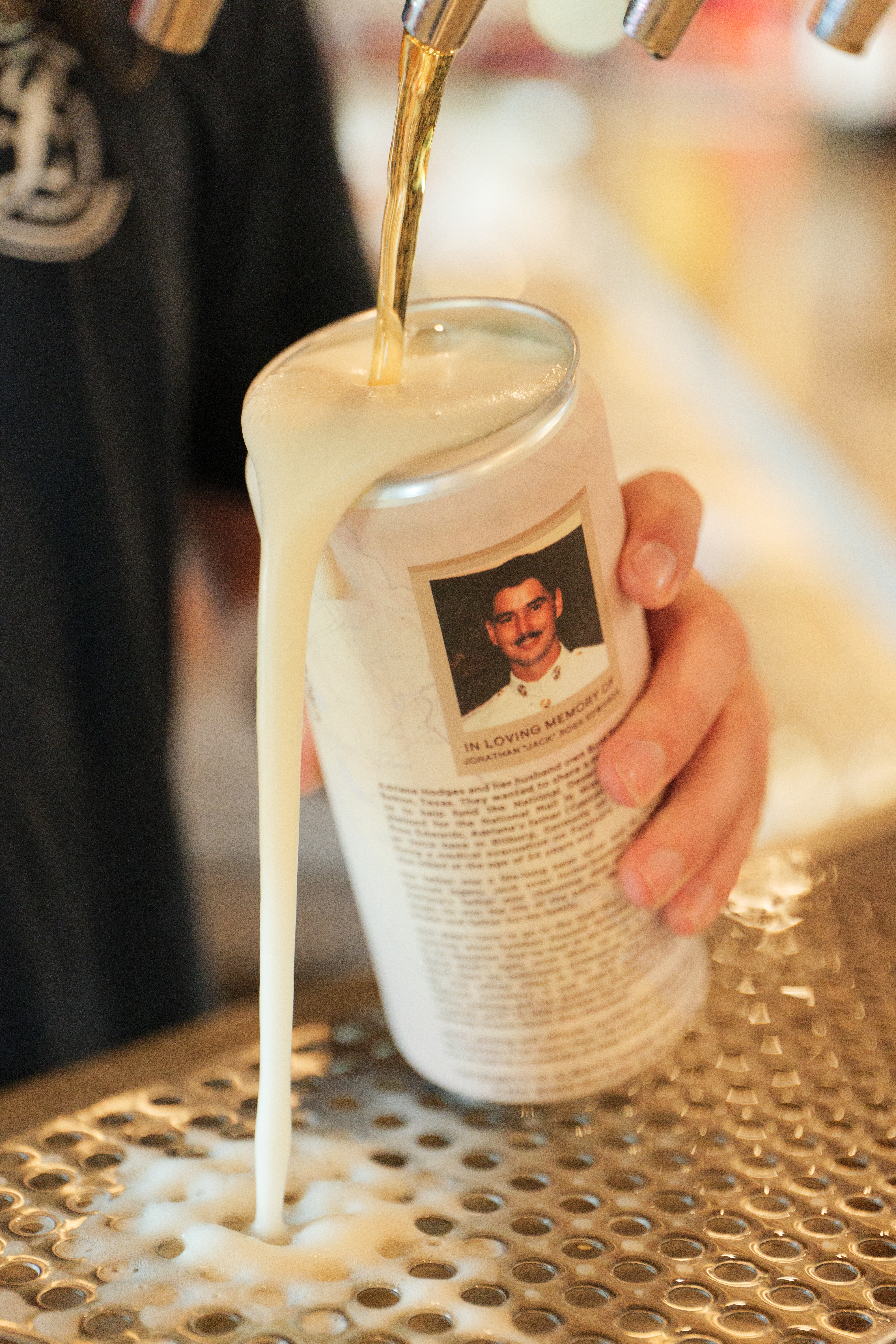 Leinenkugel’s is among the first breweries, and the first in the Midwest, to support the project.

“Marines take care of their own,” says Dick Leinenkugel.

Leinenkugel’s specializes in German-style beers, so a Helles bock, a deep copper-colored, malt-forward lager made with noble hops, fit nicely into its portfolio. The brewery tapped its new pilot brewhouse in Chippewa Falls, Wis., to make the beer, which is sold on draft and via crowlers at the Leinie Lodge.

To date, Leinenkugel’s has raised more than $10,000 for the memorial. That figure will grow even higher as it moves through the remainder of its supply of Captain Jack later this month.

The beer has been a hit with customers, Leinenkugel says. People from out of state have sent family members to the brewery to pick up a crowler. When Hodges and representatives from the memorial were on hand for a ceremonial tapping in September, a trio of Marines from Minnesota showed up in their dress blues – and left with an armful of Captain Jack.

“It’s very special to me as a veteran and a Marine to be able to support (the mission),” Leinenkugel says. “I’m really delighted that we’re able to pull this off. It’s also a fitting tribute during this special month, when we salute our veterans, to be offering this beer.”

The Gulf War was split into two phases. Operation Desert Shield was a build-up of military force in 1990 in Saudi Arabia, meant to protect the kingdom and force Iraq to vacate Kuwait, which it had invaded. Operation Desert Storm was a bombing campaign of Iraq followed by a ground invasion in early 1991.

But it seared an indelible mark on those who fought, like Scott Stump, who was a Marine Corps infantryman dispatched to the Middle East to protect supply lines. Twenty years after the war concluded, Stump realized the conflict and those who served in it lacked a national memorial.

He set out to fix that.

“It dawned on me that Americans fell into one of three categories,” he says. “They had no recollection of (the war) at all. They thought it was a 100-hour war where nobody died. Or, third, they conflated and made it part of the post-9/11 actions.

“I was thinking to myself, this thing is going to be forgotten.” 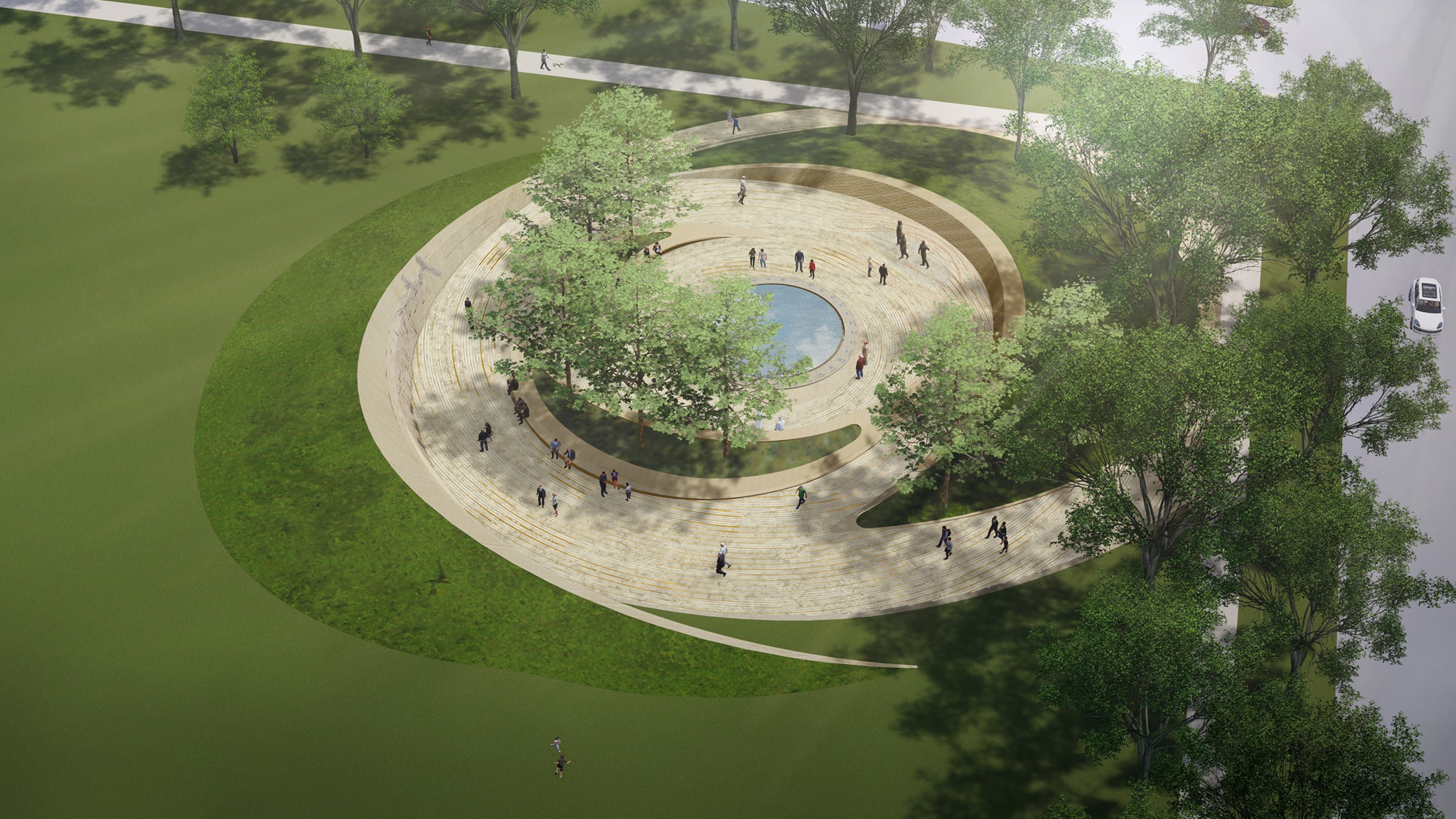 Stump has spent more than a decade working with a team of veterans from Desert Shield and Desert Storm, barnstorming across the country to raise funds and awareness of the memorial, prodding legislators and nudging the project forward. The memorial received federal approval in 2014. Last summer, ground was broken in an area of Washington, D.C., that sits between the Lincoln Memorial and Vietnam Memorial.

When it’s completed – Stump expects that to be in 2024 – it will tell the conflict’s story to millions of visitors, describing a war that brought 700,000 American troops and hundreds of thousands of other soldiers from dozens of coalition countries to the Middle East. It will show how the allies worked together to free Kuwait and honor the service and the sacrifice of those who served in the war.

The memorial reflects the “left hook” military strategy that the U.S. and its allies used to envelop enemy forces. Its curved walls will be made with sand-colored granite installed in an undulating pattern that represents desert sand dunes. And its water installation will absorb sound from a nearby roadway, providing a place for reflection.

“(The war) had too many lasting legacies in the U.S. It changed how the public interacts with the military. ‘Thank you for your service’ was borne out of Desert Storm,” Stump says. “This country, this world needs a memorial like this now more than ever. It’s not a doom-and-gloom message. It’s an uplifting message.”

As Stump and his team continue raising money, he says one goal of the memorial is to connect people through the story of those who sacrificed in the war. Much like Captain Jack, the beer.

“It’s a unique way to reach out and tell that story in an unconventional way, to reach people who might not even know the story,” Stump says. “How many memorials out there can say that beer helped built it? Probably not a lot.”

Back in Texas, Bold Republic has just opened a new location in nearby Temple. It quickly outgrew its Belton taproom. Things are happening. And Captain Jack has emerged as one of its most popular beers.

“If we don’t have it on tap, there’s an uprising,” Hodges jokes.

In addition to running a brewery, she and her husband wrangle four children: Jack, 10, Vivian, 7, P.J., 5 and Huey, 18 months. Yes, Jack is named for his grandfather. Yes, Huey is named for the helicopter.

So Captain Jack, the man, looms large. As for the beer, Hodges hopes to have a brewery in every state serving it up.

And, she says, her dad would love it.

“He’d be at the taproom, shaking hands, making friends with everyone,” she says. “It’s him in a glass.” 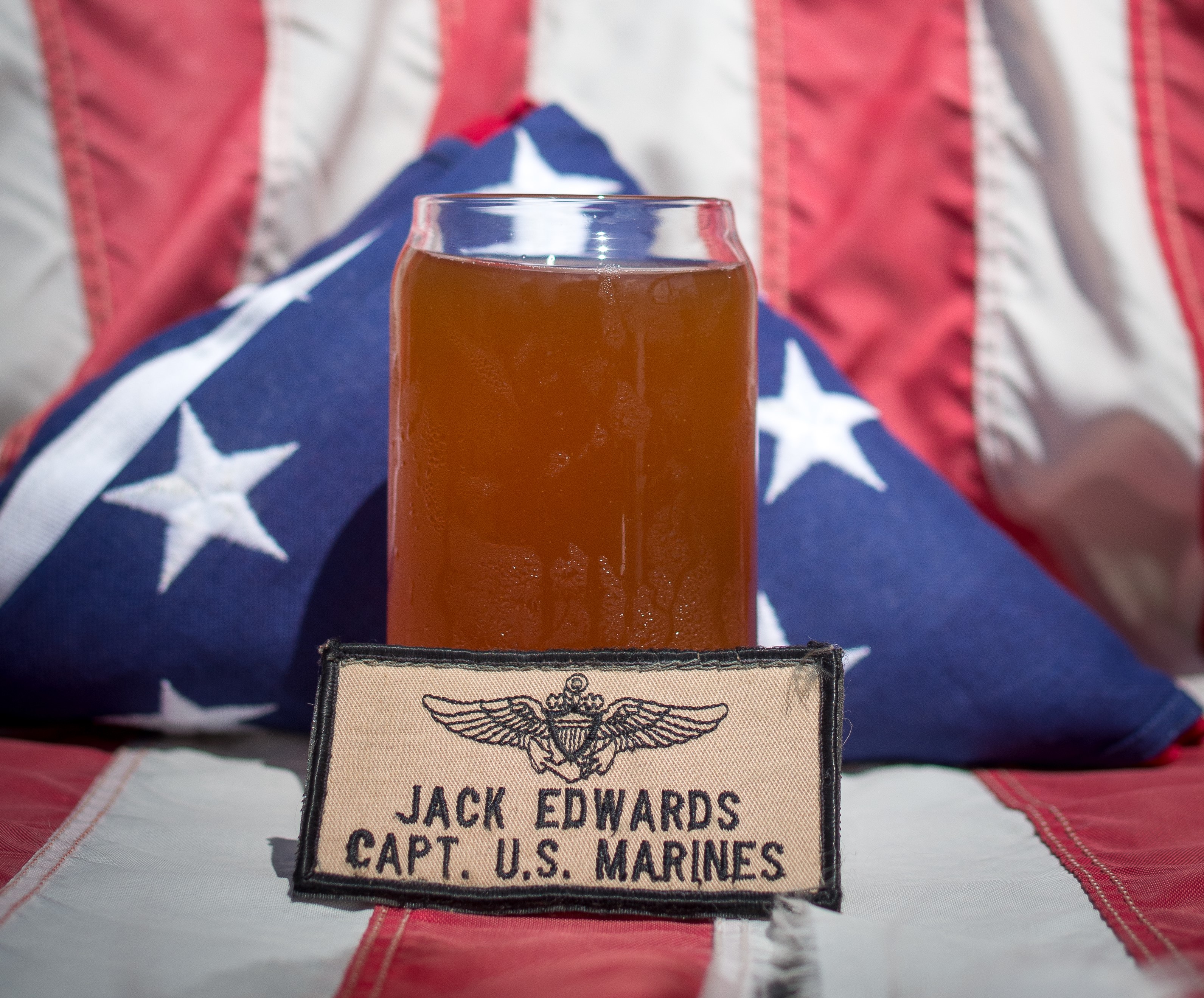