There are billboards, and then there are Chillboards.

Coors Light has launched a new advertising campaign in Miami that serves dual purposes: It’s opened up a new medium to give the brand a voice while at the same time inspiring Americans to save on home-cooling costs.

On rooftops in one residential complex in the perennially sweltering city, Coors Light has installed minimally branded rooftop “Chillboards,” which use a special white coating from Mule-Hide Products that’s been proven to reflect 85% of sunlight. The brand found that the ads’ paint lowered the surface temperature of one roof by as much as 50 degrees* – giving residents a way to lower their utility costs at a time when global temperatures are setting records.

“Heat waves and rising temperatures are a very real and serious issue. Coors Light is all about bringing chill, and with Chillboards, we found a real and functional way to do that,” says Alex Vertrees, associate marketing manager for Coors Light. “Our thought was, what if our ads could chill communities as much as our beer does?” 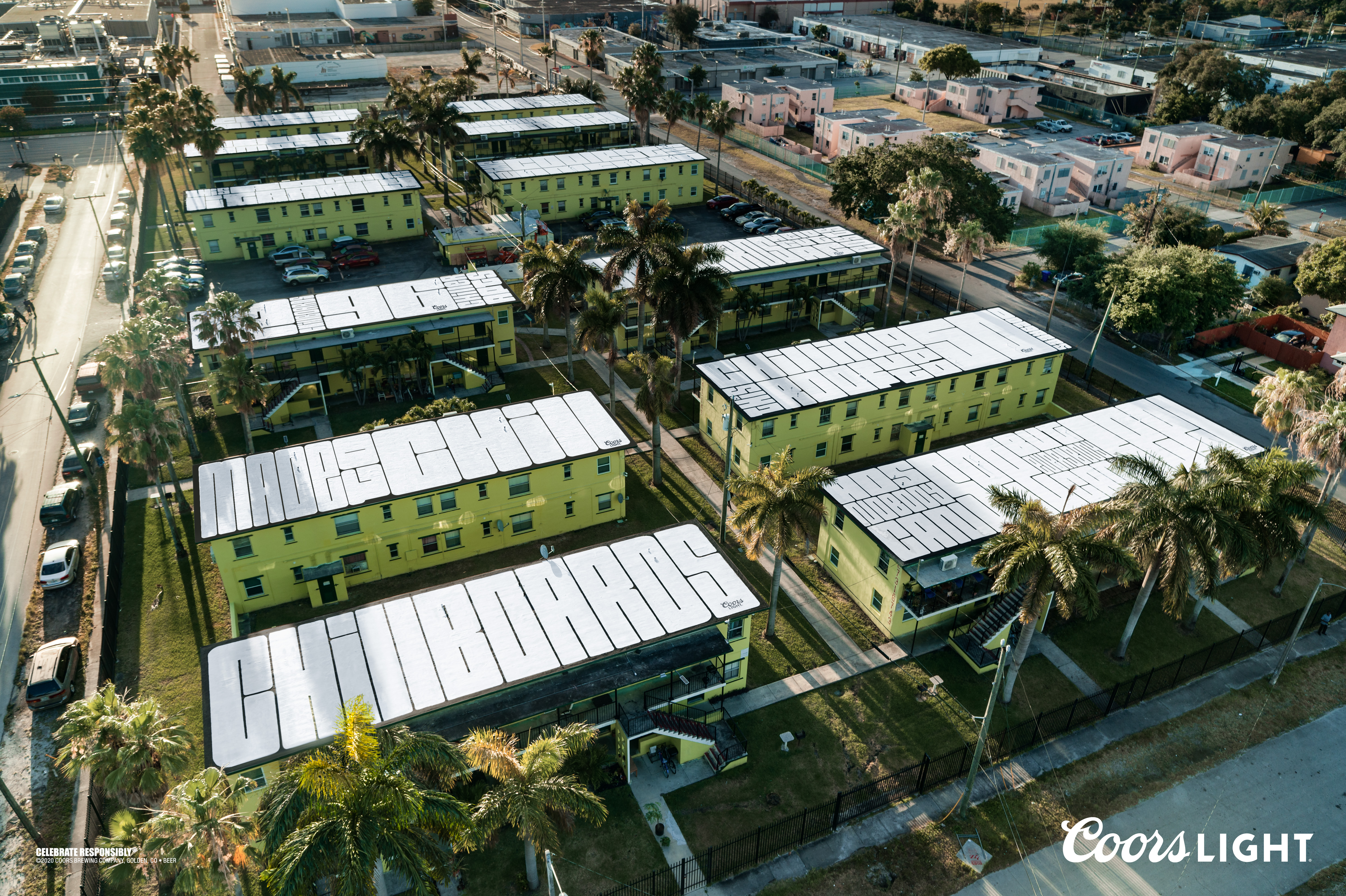 The Chillboards use a custom script that was designed to take up as much as 95% of roof space. They include slogans like “Coolest Ad in America” and “This Roof Chills up to 50 Degrees.” To create the ads, Coors Light worked with creative director Set Free Richardson and street artist Andulaz the Artist. The campaign includes an ad that will air across digital and social channels.

As temperatures rise across the globe, people and governments are looking for ways to not only combat the issue, but adapt to a warmer world. In Miami, for instance, the number of dangerously warm days is on the rise. Since 1970, the number of days with daytime temperatures over 90 degrees has grown to 133 from 84 annually, according to Miami-Dade County. That number is projected to continue growing — so much so, in fact, that the city has started naming its warm seasons, much as hurricanes are named.

The county has sought to combat warming by adding more cooling centers throughout the region, as well as installing cool pavement that reflects sunlight, and hiring a “chief heat officer,” whose job is to oversee the county’s heat-reduction initiatives.

“Simple and cost-friendly initiatives like Coors Light Chillboards can have a significant impact on the quality of life for renters and homeowners,” says Jane Gilbert, Miami-Dade County’s chief heat officer. “If more communities started seeing the value of painting roofs white, we could cool down millions worldwide.”

As part of the Chillboards campaign, Coors Light is giving away 5,000 gallons of reflective white paint. Consumers can visit chillboards.com to learn more about the program and its benefits, as well as to register to win paint.

“This is one of those surprisingly simple things people can do to reduce energy and save money,” Vertrees says. “We realize not everyone can paint their roof white, but we hope Coors Light can inspire Americans to find unexpected ways to chill.”

Chillboards is Coors Light’s latest play in becoming a more sustainable brand, and the campaign encourages consumers to think differently.

The program follows the brand's announcement in March it would eliminate plastic six-pack rings by 2023. The initiative, which comes under an $85 million investment from Molson Coors to upgrade brewery machinery, will also allow the company to transition the entire portfolio of brands it produces in the Americas away from six-pack plastic rings by 2025.

The new campaign ties into two of the brand’s key marketing pillars: sustainability and its “Made to Chill” campaign, which have combined to fuel a resurgence in sales. Coors Light grew net sales revenue in the first quarter, and combined with Miller Lite, the two brands posted their best industry share performance in five years.

*Temperature claim is based on measurements of painted and unpainted portions of the same roof. Results will vary.