She’s one of the most famous advertising icons of the past century, yet she remains an enigma. The Miller High Life Girl in the Moon has come to represent both the brand, and the company that created her.

Beer drinkers had their first taste of Miller High Life Beer on December 30, 1903; perhaps this proximity to New Year’s led to its being called the “Champagne of Bottle Beer” (now the Champagne of Beers).

Soon after its release, the beer was advertised with a drawing of a woman in what looked like a circus costume, standing on a wooden High Life crate holding a tray of High Life Beer. Her whip and tall hat resembled a circus trainer or ringmaster.

In 1907, a change was made to the Miller Lady that created an enduring icon for the brand. She was placed on a crescent moon, complete with the whip and a bottle of High Life in her outstretched arm. 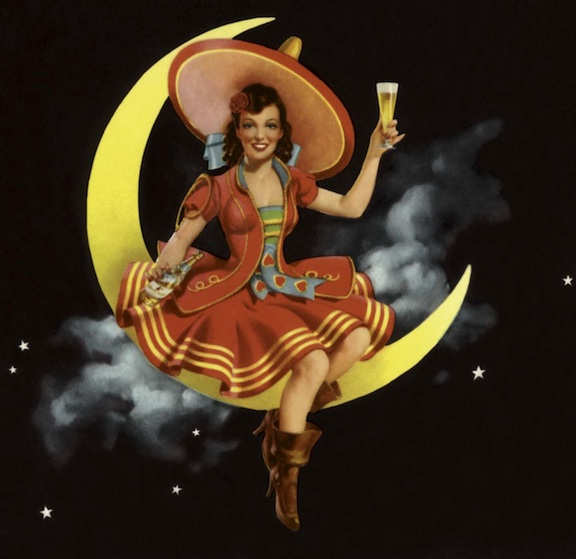 According to company legend, A.C. Paul, Miller’s advertising manager, was alone in the northwoods of Wisconsin—lost by one account—when he had a crystal-clear vision of the High Life Girl perched on the crescent moon. What’s not known is exactly how his vision became the actual Girl in the Moon shown in Miller advertising. Over the years, different branches of the Miller family have claimed various ancestors as the model, but none have been proven to be that lady. Recent research by family members of Illinois artist Thomas Holmes has turned up promising leads regarding his work in this area.

Because of grain shortages in World War II, in 1944 Miller Brewing Company president Elise John eliminated every brand except High Life, cut the advertising budget and pulled Miller out of seventeen states. Consumers rewarded this decision by choosing Miller over cheaper beers, and it confirmed Miller’s reputation for quality. At this same time, the appearance of the Miller Girl in the Moon was changed—to a woman facing forward, looking directly at the consumer.

Later, the Girl in the Moon disappeared from Miller High Life bottles and cans for a while, but she was brought back in 1998 and has remained there ever since.