Sometimes, a picture shows much more than you realize. I’ve always found this 1899 photo interesting because of the men’s concentration on an activity I didn’t fully understand. Fortunately, someone else was intrigued by this photo, back in 1955, and their research helped to explain it.

On the surface, this is a picture of men washing bottles by hand long ago. That’s true, but the whole bottling process was more different from today than I realized.

Frederick Miller brewed his first Milwaukee beer in 1855. Practically no beer was bottled at that time, as it was all sold as draft beer. People who wanted to carry their beer off-premises had to use a tin pail called a growler. Almost a quarter-century later, a Milwaukee entrepreneur started buying Miller’s beer and bottling it; it’s not clear whether Fred Miller was part of this operation or not. Within four years, Miller started bottling his own beer, but production was very limited.

Ries Behling, the researcher who explained this picture in a 1955 Miller employee magazine, noted that bottles first had to be washed and sterilized by hand. Then, they were filled by a rubber hose from a barrel of beer; much of the beer was lost because of foaming. Bottles were sealed with an individual cork that had to be wired on with pliers. Women glued on labels and wrapped gold foil around the neck. 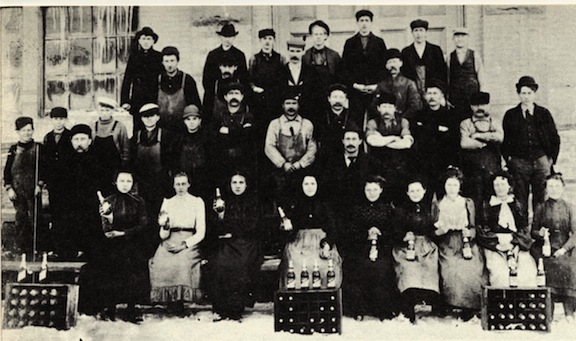 On a cold winter day in 1900 these Miller bottle house employees bravely posed outside.

The hand work continued: If the bottles were to be shipped a distance, they were put in beer barrels and packed in straw. The barrels being rolled in the background contain bottles of beer. Who’d have guessed?

In 1906 Miller opened a new bottling plant that could fill and cap 9,600 pint bottles every eight hours. That was a huge improvement, but nothing like today when the MillerCoors Milwaukee Brewery can fill over four million bottles in a single day.

A big improvement in bottling occurred after 1907, when the bottling house superintendent and a German immigrant machinist figured out how to pasteurize beer in bottles by heating them gradually, so the bottles wouldn’t crack or blow their corks. The patented process was used for many years afterward throughout the brewing industry.